Pace Prints is pleased to present a series of new monoprints and etchings by Nigel Cooke at its 521 West 26th Street location.  This is Cooke’s first exhibition with the gallery, and the artist’s first body of work in the monoprint medium.  The exhibition will be on view February 1—March 7, 2020, and an opening reception will be held Friday January 31, 6–8pm. Please note that the exhibition has been extended through March 14.

Nigel Cooke is known for his large-scale paintings that drift between the figurative world and the abstract. His subject matter is drawn from intimate personal memories, art history, and the natural landscape.  In this new body of work, Cooke takes images and themes from his paintings, and gives them up to chance. Embracing the immediacy of the monoprint process, he paints directly onto a metal plate that is then run through the press. Unlike traditional painting, this technique of printing reverses all imagery, leaving the artist with less control. Cooke relies on his intuition, gives himself over to the separation of intention from result, and embraces the surprises that come out in the process. The build-up of multiple passes through the press produces what Cooke refers to as an “X-ray effect,” showing the process of how an image comes into being and exposing visible corrections and revisions.

Viewing the prints as “remixes” of his paintings, Cooke uses this layering to further investigate the human relationship to nature and to blend aspects of life that do not typically go together. He places a bodily mass within a grid of natural structures; humanoid figures facing animals are forced to confront their narcissism of projecting onto nature.

This juxtaposition is seen in Cap de Barbaria, where figure upon figure becomes a nucleus of chaotic line. Arms and legs condense, forming a subject that is no longer discernably human. This mass of entanglement thrashes between foreground and background, in a setting that, from the work’s title, holds a likeness to the rocky and desolate terrain of the Balearic Islands in the Spanish archipelago.

The figure at odds with its landscape is seen again in Beasts of Burden, a set of two soft-ground etchings with pochoir.  Cooke views this pair of etchings as a concretized version of what he learned through the monoprint process; etched on a copper plate, this image becomes fixed, no longer subject to the liquid behavior of ink. This time, the figures are not only confronting nature, but also each other. Facing one another, masked male and female forms become alienated from their distinct humanness.  Pushing and pulling against their landscape of eyes, animals, cigarettes and branches, the figures remain the dominant beasts of the image.

Nigel Cooke was born in Manchester, England, in 1973 and lives and works in London and Kent.  His work is included in public collections around the world, including the British Council, London, the Astrup Fearnley Museet for Moderne Kunst, Oslo, the Sammlung Goetz Collection, Munich, the Solomon R. Guggenheim Museum, New York, the Hammer Museum, Los Angeles, the Honart Museum, Tehran, the Museum of Contemporary Art, Los Angeles, the Museum of Modern Art, New York, and the Tate, London.  Cooke shows with Pace Gallery internationally and has a one-person exhibition at its 540 West 25th Street, New York, space, January 31—February 29, 2020. 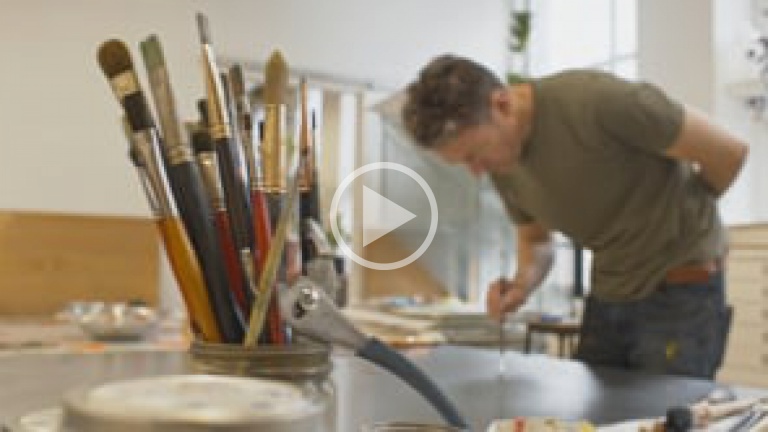 Nigel Cooke on remixing his process and our place in nature