Ryan McGinness: Figure Drawings is a continuation of the artist’s Women series, which began in 2010. Drawing directly from nude models, McGinness approaches these drawings in the same manner in which he creates his signature undulating and layered icons. He begins with sketches, and refines those drawings down into their basic and most essential forms. In the Women series, the artist simultaneously embraces the inherent sensuality of his models through their graceful lines and gentle curves, while allowing his iconic drawings to be less about the individual woman and more about presentations of universal womanhood.

Entwining the cool glow of various neon lights with his women, composed of flat shapes à la Matisse, the works are at once signage, symbol, and live interaction. With neon, there is no real substitute to seeing these electric drawings in person as photographs cannot fully capture the colorful hazed effect on the figure. This sexy emitted light glows on the entire exhibition, giving a spectacle buzz to the full body of works. Also included in the exhibition are a series of new fluorescent silkscreened Women Parts, porcelain-baked enamel on steel panels, halftoned models on linen, and mirror polished stainless steel works with etched figures—which resonate with the neon lights, layering images in reflection.

Ryan McGinness was born in 1972 and grew up in the surf and skate culture of Virginia Beach, VA. The artist completed his B.F.A. at Pittsburgh’s Carnegie Mellon University, and worked as a curatorial assistant at the Andy Warhol Museum. He has achieved international success, having had numerous solo and group exhibitions throughout the United States, Europe, and Asia. His work is included in many public and private collections, including the Museum of Modern Art, New York, NY, Virginia Museum of Fine Art, Richmond, VA, and The Charles Saatchi Collection, among many others. McGinness’ Women series has been shown in interactive exhibitions at Club Madonna, Miami, FL, Le Bain at The Standard New York, NY and The Purple Lounge in Los Angeles, CA. The artist currently lives and works in New York, NY. 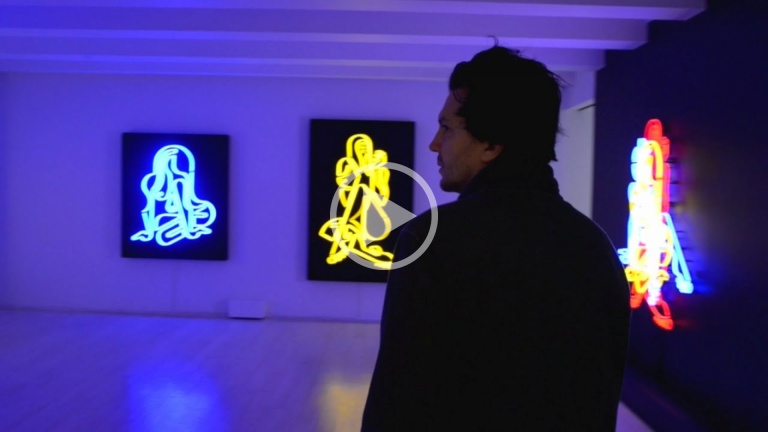