Pace Prints is pleased to present Leonardo Drew, on view February 27—April 11, 2015 (Extended to April 25, 2015). This is Drew’s second solo exhibition with Pace Prints, showcasing the artist’s newest body of work made at the Pace Paper workshop in Brooklyn. An opening reception will be held on Thursday, February 26, 6-8pm.

Leonardo Drew’s monumental 38P tests the versatility of its medium, transforming cotton paper pulp and pigment into what appears to be melted silver in a dry lunar landscape. Organic forms within the composition undulate with various textures and luminosities, pushing the boundaries of its materiality. The piece’s gravitas stems from an existential tension, dwelling between sculpture and painting. Drew reflects, “We ended up rewriting; adding new levels to the medium. The idea of using paper was one thing, but the actual end result seemed to be much, much more than that.”

Much like his large-scale sculptural installations in wood, Drew starts with a raw material, transforming and reconstructing its essence until it resembles debris. Through this process, the artist articulates diverse histories of chaos, and cycles of birth and death. His works in paper pulp have a roughness and intimacy bound to the elemental, at once powerfully large yet fragile. Evocative of fire, soil, sky and water, yet simultaneously resembling aerial views of densely populated cities, there are strong perceptions in both microcosmic and macrocosmic scale.

In 33P, Drew’s compositions often stem from a central core, working outward with organic, neuron-like forms. His formal concerns echo themes of memory, spirituality, entropy and nature. The Japanese term wabi-sabi is often used in connection to the artist’s work, noting his appreciation of ingenuous and inherent integrities of natural objects and processes.

Drew has been making artwork since childhood, and first exhibited his work at the age of thirteen. He went on to attend the Parsons School of Design and received his BFA from the Cooper Union for the Advancement of Science and Art in 1985. Since then, he has shown in a variety of institutions, such as The Hirshhorn Museum and Sculpture Garden at the Smithsonian Institution in Washington DC, the Royal Hibernian Academy in Dublin, Ireland, The Art Institute of Chicago, The Miami Art Museum, and the St. Louis Art Museum. He has also collaborated with the Merce Cunningham Dance Company, and has participated in artist residencies at Artpace, San Antonio and The Studio Museum of Harlem in New York City, among others. He is represented by Sikkema Jenkins & Co. in New York. 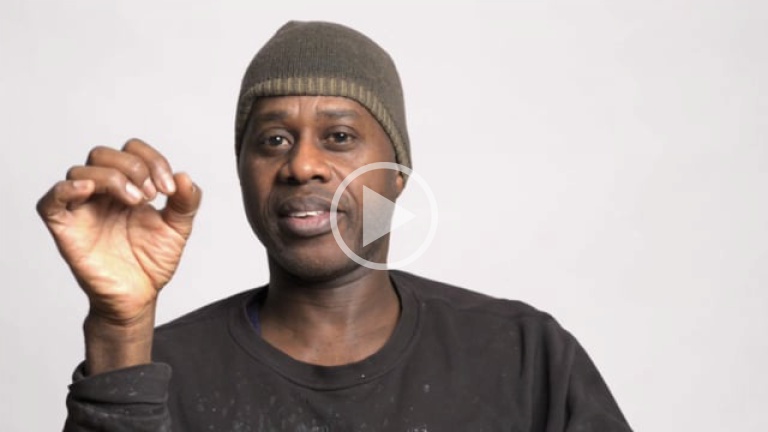 Leonardo Drew on his new body of cast paper works