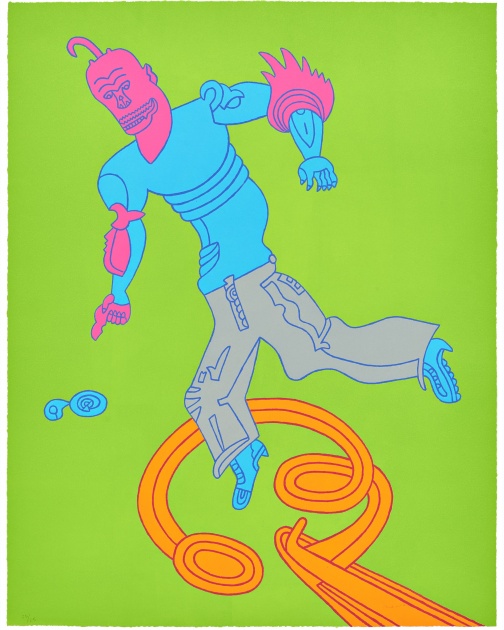 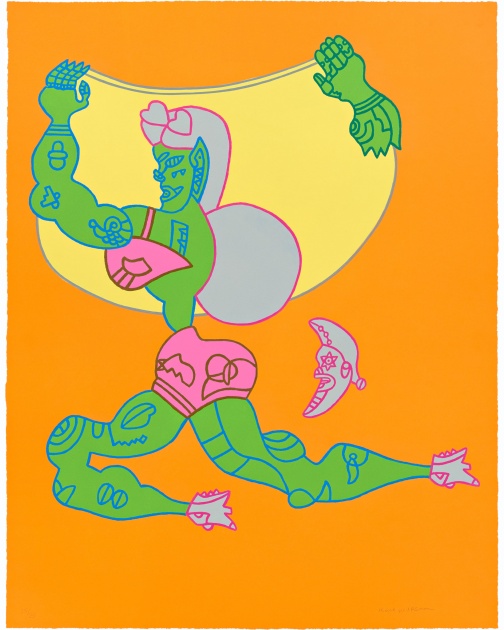 Karl Wirsum was raised on the South Side of Chicago and even as a child was drawn to rhythm and blues music and the Maxwell Street Market, an open-air flea market. Inspired by his visual and sonic experiences and memories, drawing poured out of Wirsum in much the same way as sound does from an improvising musician. And like improvised music, his direct drawings rarely show correction or revision. He often depicted musicians in his artwork and took inspiration from source material he scavenged at the flea market.

Wirsum enrolled at the School of the Art Institute [of Chicago] in 1957 and was the first of the Hairy Who artists to graduate. Wirsum studied with Kathleen Blackshear, an eccentric art historian who mentored Whitney Halstead, an instructor important to the development of the rest of the Hairy Who.

It was through Wirsum’s friendship with Don Baum, the exhibition chairman of the Hyde Park Art Center, that he became part of the Hairy Who. Baum recommended that Wirsum be included in the small group exhibition that Jim Falconer and Jim Nutt proposed to him, and it was Wirsum who unintentionally coined the name Hairy Who. The six artists of the Hairy Who—Jim Falconer, Art Green, Gladys Nilsson, Jim Nutt, Suellen Rocca, and Karl Wirsum—decided that the best way to find success was to exhibit their work together, and as a group they began mounting unconventional displays of bright, bold graphic work in the mid-1960s. Over a period of four years they transformed the art landscape of Chicago, injecting their new and unique voices into the city’s rising national and international profile.

Source: The Art Institute of Chicago