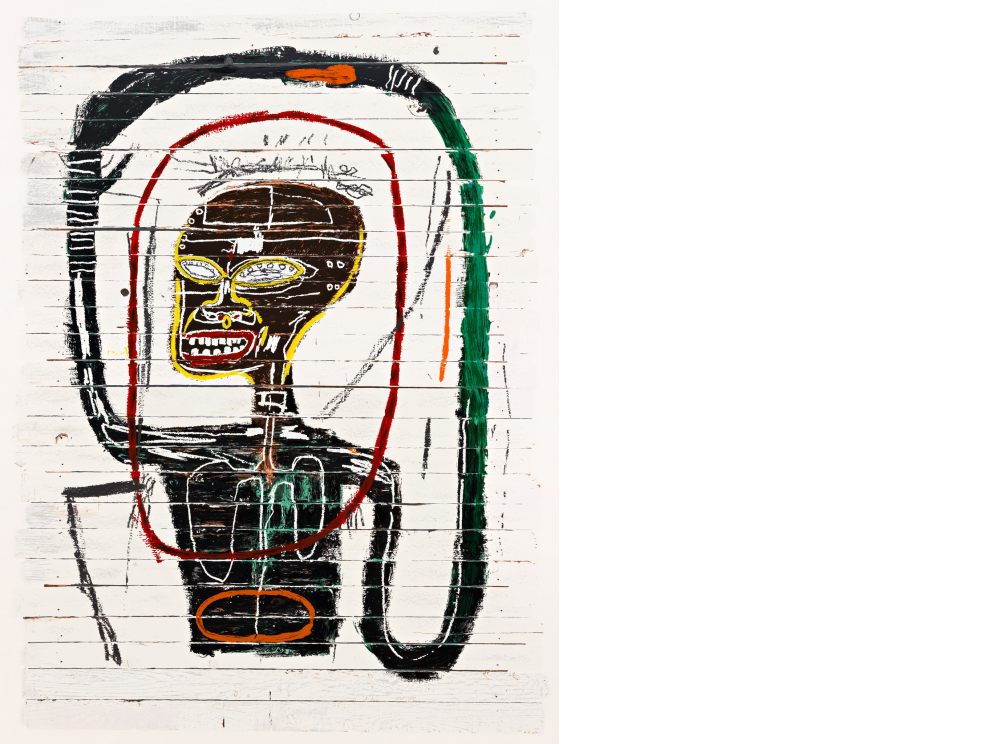 New Release from the Estate of Jean-Michel Basquiat

The Estate of Jean-Michel Basquiat is pleased to announce the release of a new 24-color Basquiat screenprint titled Flexible (1984/2016), published by Flatiron Editions. The edition of 85 will be available exclusively through Pace Prints starting on June 7, 2016 at 11:00am EDT.

Flexible, based on a panel painting created in Basquiat’s Venice, California studio in 1984, portrays the griot—a storyteller, entertainer, and purveyor of oral history from West African culture. Referencing the artist’s exploration of and struggle with the role of artist-as-everyman, his interest in imagery from earlier cultures, an affinity for historical and contemporary black figures and an x-ray view into internal organs, Flexible conveys an examination of identity. Basquiat’s signature broad, aggressive brush strokes and flat areas of color both reveal and conceal previous layers of paint and imagery, framing one of the artist’s most arresting and iconic figures.

The posthumous release is stamped and signed by Lisane Basquiat and Jeanine Heriveaux, the artist’s sisters and administrators of the Estate of Jean-Michel Basquiat.

Flexible (1984/2016) will be available at Pace Prints Gallery, 521 West 26th Street, New York, NY and via email starting at 11:00am on June 7, 2016. Priority will be given to in-person requests. For remote requests, please email basquiat@paceprints.com starting at 11:00:00am EDT with your name, billing address and telephone number. Requests will be confirmed via phone in the order in which the emails are received. Emails with a timestamp before 11:00:00am EDT on June 7 will not be honored. The edition will be released at $40,000 USD with tiered pricing. A non-refundable deposit of $5,000 USD is required to secure the purchase and payment must be made in full by July 29, 2016. Packing, framing and shipping not included.

Jean-Michel Basquiat was born in Brooklyn, New York on December 22, 1960. He began his career making street art composed of enigmatic writings on buildings and walls in downtown Manhattan in the late 1970s. His work quickly rose to the spotlight, and by the early 1980s he gained the attention and acclaim of galleries and museums internationally. In what is often classified as a neoexpressionist style, Basquiat drew on social and political themes like systematic racism, identity politics and commodity culture. The artist died at the age of 27 on August 12, 1988 in his studio on Great Jones Street in New York City. Major exhibitions include “Jean- Michel Basquiat: Paintings 1981–1984,” Fruitmarket Gallery, Edinburgh (1984; traveled to Institute of Contemporary Arts, London; and Museum Boijmans Van Beuningen, Rotterdam, through 1985); Kestnergesellschaft, Hannover (1987, 1989); Whitney Museum of American Art, New York (1993; traveled to Menil Collection, Houston; Des Moines Art Center, Iowa; and Montgomery Museum of Fine Art, Alabama, through 1994); “Basquiat,” Brooklyn Museum of Art, New York (2005; traveled to Museum of Contemporary Art, Los Angeles; and Museum of Fine Arts, Houston, through 2006); and Fondation Beyeler, Basel, Switzerland (2010; traveled to Musée d’art moderne de la ville de Paris); and “Now is the Time” at the Art Gallery of Ontario (2015; traveled to the Guggenheim Bilbao in 2015). A major exhibition of his work is scheduled for 2017 at the Barbican Centre in London.

The Estate of Jean-Michel Basquiat