Pace Prints is pleased to present Leonardo Drew, an exhibition of cast handmade paper pulp editions, from September 15 to October 30, 2021, with an opening reception on September 14. This exhibition, focused on works created over the last eighteen months, marks ten years of the artist’s collaboration with Pace Prints. Leonardo Drew, which runs concurrently with the artist’s exhibition at Galerie Lelong & Co., will be on view at Pace Prints at 521 West 26th Street, 4th Floor. Please note that this exhibition has been extended through November 6, 2021.

This exhibition, Drew’s fourth with Pace Prints, reflects his ongoing dialogue with the world around him. Papermaking affords an opportunity to build sculptural work that is lighter in structure. In this case, cotton and flax fibers are used to create varied surfaces and are pressed into molds created from the artist’s large maquettes, to make high relief works.

Drew brought inspiration from his studio, as well as his extensive travels, into the Pace Paper studio. Among his sources, the artist used photographs from Cuba as a reference for color and line. After working in China between 2015 and 2019 with porcelain and glazes, Drew began to add new colors and texture to his sculptures and prints. Many of those colors appeared in his monumental Madison Square Park commission City in the Grass (2019) as well as a gallery-spanning installation, Number 215 (2019). This color palette continues within 84P (2021) a lyrical set of nine dimensional works in cast handmade paper. 84P draws a through-line to previous work, created in the same scale as 62P – 71P (2017), but incorporating Drew’s enlivened palette.

Over his ten-year history with Pace Paper, Leonardo Drew has inspired new techniques by demanding the greatest effort from papermakers Emily Chaplain, Rachel Gladfelter, Ruth Lingen, and Akemi Martin. This exhibition marks the apogee of this collaboration with five cast paper works of unprecedented scale and complexity. In two of these massive works, 92P and 93P, large molds were both filled with layered dried pigmented paper chips and cast with paper pulp. The color palette and visual language of these paint chips mimic ceramic pieces stacked and accumulated into a horizontal mosaic. 88P, 89P and 90P, created in multiple sections with a similar depth as the artist’s sculptures made of wood and tile, jut outwards as though reaching beyond the traditional “printed” form. Each of these massive pieces has the same organizing energy as Drew’s sculptures exhibited in recent years.

Leonardo Drew has been making artwork since childhood, and first exhibited his work at the age of thirteen. He went on to attend the Parsons School of Design and received his BFA from the Cooper Union for the Advancement of Science and Art in 1985. Since then, he has shown in a variety of institutions, such as The Hirshhorn Museum and Sculpture Garden at the Smithsonian Institution in Washington DC, the Royal Hibernian Academy in Dublin, Ireland, The Art Institute of Chicago, The Miami Art Museum, and the St. Louis Art Museum. He has also collaborated with the Merce Cunningham Dance Company, and has participated in artist residencies at Artpace, San Antonio and The Studio Museum of Harlem in New York City, among others. He is represented by Galerie Lelong & Co. in New York. 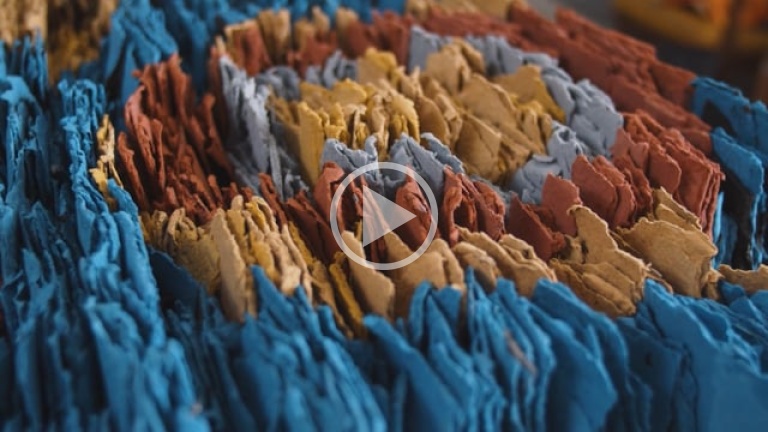