Pace Prints is pleased to announce Final Resting Face, an exhibition of new etchings and monoprints by American painter Robin F. Williams. This is Williams’ first solo exhibition with the gallery and will be on view October 22 – November 27, 2021, at Pace Prints 521 West 26th Street, on the third floor. An opening reception will be held Thursday, October 21, 6–8pm.

Robin F. Williams began her collaboration with Pace Editions’ printmakers in 2019 with a series of monoprints—unique prints from plates that are reused and often combined. In early 2020, she returned to the print shop to begin a new body of work, leaping off from the discoveries of the first project and working with Sarah Carpenter to create her first series of etchings.

The corpus of prints that Williams created for Final Resting Face riffs extensively on the idea of ghosts in both its subjects and techniques. In printmaking, a ghost image is a second impression taken from a plate without reinking—a process that the artist embraces in her monoprints, where graphic elements are layered to create shifting effects of opacity and color. As a subject, ghosts and paranormal beings are central to Williams’ œuvre, which is populated largely by figures that willfully resist normative identification or labels. A sequence of Water Ghost monoprints shows off William’s distinctive use of texture and deft inversions of figure and ground, with the repeated figures forming an undulating pattern over the watery surface. In the Plural Ghost series, the silhouette of a waving figure is overlaid on itself to become an elusive multiple exposure, winkingly reminiscent of 19th Century spirit photography.

William’s concerns are primarily contemporary, however, as she means the Plural Ghosts to address the moral panic surrounding non-binary identities and non-gendered pronouns. “Of course, the panic is about policing gender,” she writes. “But it’s also an existential fear of plurality as it relates to identity. The idea of identities being fluid, ephemeral, undefinable, or interdependent can be very scary to some people. I wanted to make that idea into a friendly ghost who transcends space-time, waving back at the fear.”

While in her paintings Robin F. Williams is known for the impressive complexity of her compositions and technique, she approached monoprinting from an intentionally constrained stance, seeking out the most elemental forms to animate the images with a range of emotions with the subtlest of variations. Her pairs of Smoke Ghosts have no substance beyond an implied outline and sets of eyes and mouths, whose shifting configurations suggest unknowable dialogues and conflicts between—possibly within—them. In her words, “This [comes] back to these ideas of how far you can pare down an identity or an affect or just make something human and relatable out of a couple of lines. I think we’re also used to that shorthand now, because everybody is communicating with emojis. Even just the colon and the parenthesis smiley face says so much.” Technique and subject also cross-pollinate in this series: the artist captured smoke in transparent ink by drawing below it with a torch. In this act of transubstantiation, Williams gives body to the ephemeral, but the images remain cryptic, evanescent and changeable, always slightly beyond the viewer’s grasp.

The vibrantly colored and textured Sperm Ghosts playfully rebut somber debates over the definition of life and existence. “You could go down a very political road with these questions,” Williams says. “But I think I’m coming at it from more of a place of curiosity and wonder and interest in the stories that we tell about consciousness, what it means to be alive, what it means to have a body.”

The three etchings, created in editions of 30, bridge the meticulous atmospheric rendering of William’s canvasses and the spontaneous graphic experiments of her monoprints. The image of Troll is the exhibition’s only reprise of an earlier painting, yet it exploits techniques specific to printmaking, such as the rainbow roll gradient and hard ground etching, to completely refigure the relationship of color and line. The waving gesture of the title figure occurs throughout Williams’ work, signaling a mocking acknowledgment of the relationship between viewer and subject.

Witch Babies and Shadow Family employ combinations of Williams’ subtle draftsmanship and other forms of manual and mechanical mark-making to build up delicate tension between the figures and their surroundings. The latter is printed on handmade pigmented paper, created in the Pace Paper studio, setting the image on a vibrantly-hued ground that makes the ghostly figures shimmer elusively in and out of focus.

Robin F. Williams has made environmental activism central to her practice as a member of Artists Commit. To offset the carbon footprint of this exhibition, Pace Prints will donate proceeds from the sale of Shadow Family to permanent, old-growth forest conservation with Galleries Commit x Art to Acres. 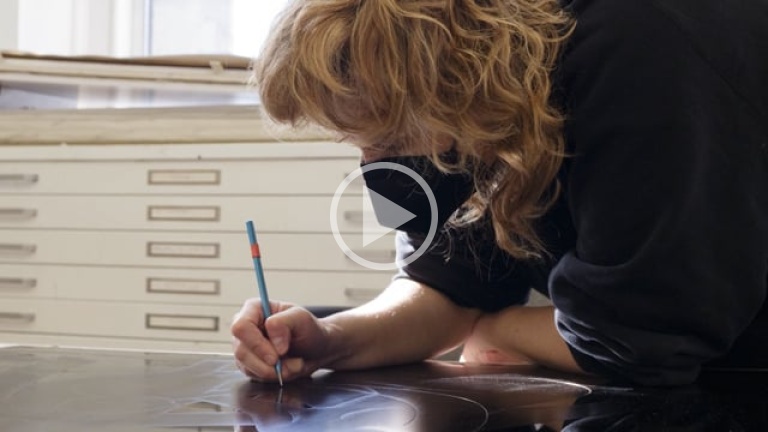